In the Valleys of the Sea 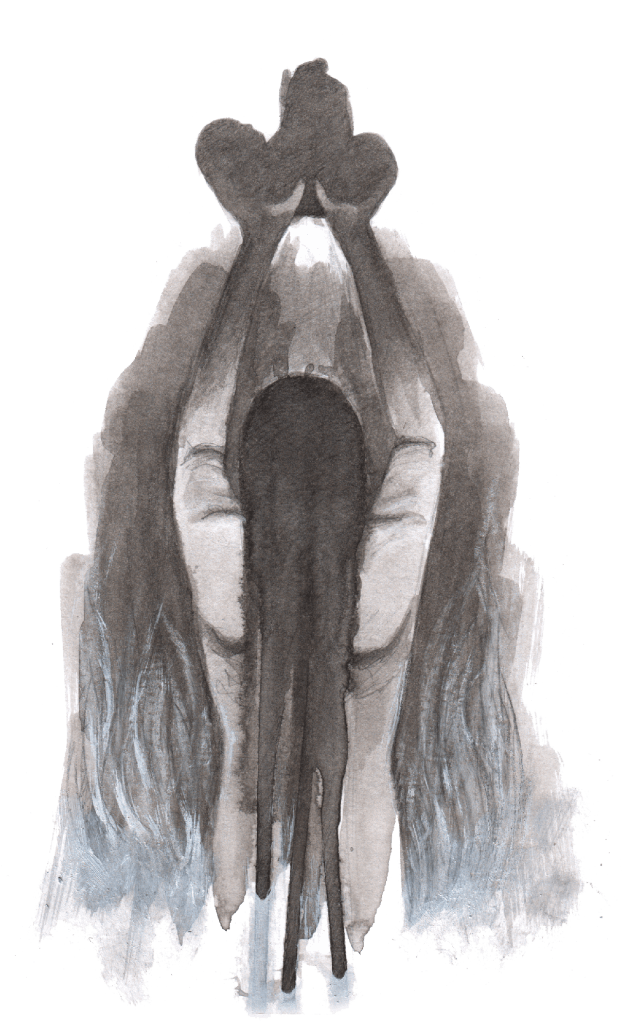 Six weeks since the last rain fell. The ground is a cracked scab under which no blood runs.

Six months since the Greeks came, their spears flashing in the sun.

In the Valleys of the Sea is a verse play based on the myth of Demeter in Eleusis, also known as Demeter and Demophon.

The land is war and drought. Nira struggles to keep her family alive. Six months since the Greeks came, killed her husband, occupied her country. Her youngest daughter, only a baby, is starving. Her eldest daughter, Kallithoe, wants nothing but to leave – her middle daughter, Iambe, runs through the fields, taunting the Greeks.

Now there is a stranger in their house. An old woman, seen out in the fields, bleeding and exhausted. They bring her in and tend her wounds.

The old woman is mad. She tells her story, a patchwork rant. Her daughter has been taken; she is wandering in search of her. She is Demeter – her daughter is Persephone, taken into the underworld by her uncle, Hades. I have brought the drought, she tells Nira – and until her daughter has been returned, the earth will be kept barren.

In the Valleys of the Sea is a verse play in three acts. It is going to be adapted into an opera by composer Ed Scolding.

This is not sleep. If sleep is a sea then this

Is ocean’s depths, the thinnest air upon

KALLITHOE: Mother, we should go. Wait! Mother, do you
Hear me? This place – an arid stack of shells
Even the ants go round. A thing sucked dry.
Mother, we must go. Please. The life has flown
And we must follow.

NIRA: ‘Follow’? We must follow?
That’s to wait. Going or not, we’ll join the disjoint
Dead. ‘Go’! Go where? Should we disperse like dust,
With the faith of dust, with the love of dust,
To flit lamenting nothing through the air?
Or with the love of fleas, who leave their home
As soon as time has clapped its hands, zeroed
The appointed hour, clotted up the blood
And cede their kingdom gladly to the flies?
This is my home.

NIRA: Then demonstrate
Your faith.

NIRA: Life will return.
A little time. The rain will fall again.
Beneath the dust the seeds persist.

KALLITHOE: Beneath the dust
Is dust.

NIRA: I love my home.

KALLITHOE: Then love
As I love my father: in remembrance.

KALLITHOE: Do you hate us so much?

CAPTAIN: Why must you call it
Hate? We do it out of love. So – the lion
Inherits his pride – first he kills the cubs,
Not out of any hate for them, but love
For those unborn. Think that of us: as mere
Inheritors –

NIRA: Who with my country’s blood
Washed it clean of its own self –

GREEKS: We will do more.
The end of our sewers will feed
The sources of drinkable water.
We’ll cast all our bullets in salt
So even a slip in our aim
Will serve our ultimate aim
Sterilise your soil, scab up your land.
We’ll quarry the mountains to dust
And scatter the dust on the fields
To harvest their withering up.
We’ll make a salt pan of your nation.
We’ll grind it up.
We’ll boil it dry.

CAPTAIN: More pride in a cesspool bears our name,
Than a garden whose use is common.

NIRA: Common!
Ours! Convention didn’t make it so,
Nor some formality of name, but use.
You smother the use to choke its child
And give your terms a stolen primacy.
You murder us to name the corpse.

A grove of olive trees. GREEK SOLDIERS are there, carrying torches and canisters of fuel. Throughout what follows, they prepare the trees for burning.

GREEKS: Ha! The mother has finally come.
The one on the threshold of cronehood.

GREEKS: We saw shadows under the trees.
They looked like the shadows of men.
Barren grey faces – all the same.
You cannot tell the good from bad
The friend from the foe, alive from dead.
Even the dead keep their shadows,
And your own gets lost in the scrum.
You want to forget you’re a man
When your enemies will not be men
And face you foursquare for the fight.

NIRA: There are no men here – only boys afraid of ghosts.

GREEKS: And not afraid to admit it.
Every pile of stones, every door,
Every window and every child’s tossed toy
Is clung to by the shadow of a man –
The grave of a dead man’s hate
Grasps hands with the living,
Completes an explosive circuit –
Boom!
How do you defeat a ghost?
Like stabbing at dust.
Like chopping
The head off a pile of sand.

KALLITHOE: The animals are dead, the fields barren –

GREEKS: Is this our fault?

KALLITHOE: The oil of these trees is our last hope.

GREEKS: Their shadows our last foe.

NIRA: Honour is thrift in action. Will you
Destroy without gain what’s ours without hurt?

GREEKS: This is the promised tithing.
Hard on the heels of the sower
The eagle throws his shadow
On the field his danger grows in.

NIRA: They are no threat – they are old bones – even
In their youth they never held a sword –
Their limbs reach up in vain for their own leaves.

GREEKS: But their shadows are healthy and strong.
And therefore they must be burned.

All things are a war. To breathe is war,

To colonise the common air; to move

Is war – the blood fights with the vein, the muscle

With the bone, desire with capacity;

To love is war, to yoke that which we love

To the notion we have of it; and –

By all these consequent – breeding, too, is war.

If what the world will have of her is children,

My children’s mother learned from every thing

To be a war in everything